I was looking for a specialist arts shop in Leamington Spa, I really thought there isn’t one until a friend told me to find ‘Chrome Yellow Arts‘ – it turned out it’s only minutes away from my studio. That’s how I got to meet Suminder who, along with her partner Jonathan, both artists, are running this wonderful place. Suminder was so kind to spare some of her time to interview her, it was truly enjoyable conversation and I would like to share it here with you.

How did you start Chrome Yellow?

Me and a friend of mine – Tammy Woodrow, had this idea of a van full of arts materials for sale with which we could go to different places. Sadly we never pursued this idea but at that time I was already running the studio at Althorpe Studios and Gallery and I started the business with art materials from there. Unfortunately the location wasn’t  too suitable for that kind of shop and there weren’t many visitors. At that time I was already thinking of starting a shop on the high street and with the help of local artist Sueli Moreton and Jonathan we managed to open a joint venture in April 2014.

Why did you call it Chrome Yellow Arts?

We were going over name ideas one evening and we decided that the best thing to do is to go for our favourite colours. We both liked Chrome Yellow and used it a lot in our artworks, so it became our choice of shop name.

Tell me a little bit about your background?

I was born in India and I did a degree in Economics and History. I had just graduated and was working as a primarily school teacher when my best friend was taking a course in Painting. She invited me to draw together and that’s how it all started. I was self-taught initially and at that time I didn’t use my imagination as much when creating my paintings. I would often find cut outs of newspapers and draw them. I remember I found this photograph of a woman and a child in the paper and I made a painting of them. I would draw the tree in the back garden, seascapes, etc.

Later, in 2007, I did a degree in BA (Hons) Fine Art from Birmingham City University.

Where did you grow up?

My dad was in the army so we would always move from city to city. This has had some impact on my personality – I am the happiest person moving things round, I often rearrange the furniture in our house and change the places of things.

Which is your most vivid childhood memory?

That painting of a woman and a child I told you about, I wanted to enter it into a call for artists. However I was too young to enter, there was age restriction on entries. So I asked a friend’s mum’s to submit it under her name. It eventually got selected for the show and sold. I got myself a beautiful watch as a memento.

How would you define your style?

I would personally define it as expressionist, it’s more about expressing feelings, combining colours and textures, bringing in the memories of a place. I get huge inspiration from places and especially cities I’ve visited, however it’s not so much about the physical reality of them, it’s more about the their inner tonality,  symbolic meaning, the feelings they evoke in me. For instance inspired by my visit to Taj Mahal I painted ‘Echo of Sorrow’.

Or after my visit to Jaipur, known as ‘The Pink City’, I was creating artworks with pink tones and it’s the result of the influence this place had on my creativity.

Which is your signature artwork?

I really loved ‘Red Bólus’ and the energy that was captured in it. It was selected for the Leamington Open 2017 and sold shortly afterwards.

Are there any constant motives in your artworks?

Squares and rectangles, shapes inspired by architecture and buildings. I don’t particularly like curves and arches. I prefer straight lines.

What is the mission of art as you perceive it?

For me it’s like a language. The say way writers express themselves through written words, I express myself through colour and texture.

What is the importance of the quality of materials you use to create?

For me it’s very important to use high quality oil paints. You will find that compared to cheaper alternatives their pigments are brighter and more lasting. It’s good to think about the preservation of a painting, if we look at the Old Masters – their artworks lasted and kept their pigment for so long because they were mixing their own colours and using quality materials.

What is the most valuable advice you’ve been given as an artist?

To work on two paintings simultaneously. It gives you time to do things right, even take a step back to evaluate your progress and make it work.

What would you advice those who are just starting in art?

Don’t be precious about what you do but play.

Do you have a favourite artist and if yes, who?

Rothko, he’s often defined as abstract expressionist. I love his colour-filed paintings and the layers he does.

Can you tell me of a painting of yours with a particularly interesting story?

Alright, this one may sound a bit crazy but here it goes. I used to do mainly figurative paintings in the past and I entered one of them called ‘After the Storm’ for the Leamington Open. It did not get selected which I found really frustrating. I just felt really angry…. So I got back home that evening and painted it all over with black paint. And I left it for a while… Later this same painting became ‘Half-Crescent Moon’, a painting I did as a tribute to my nan, I’ve included certain architectural elements of her home – the stairs, the decorations, she liked golden colour… and the moon is like the place out of this world where she was heading to… This painting was later purchased by Ray Spence. 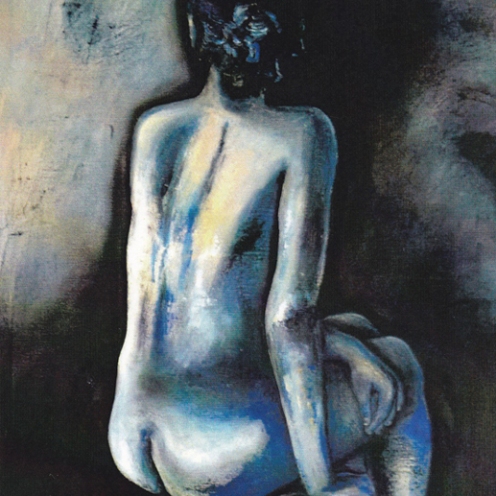 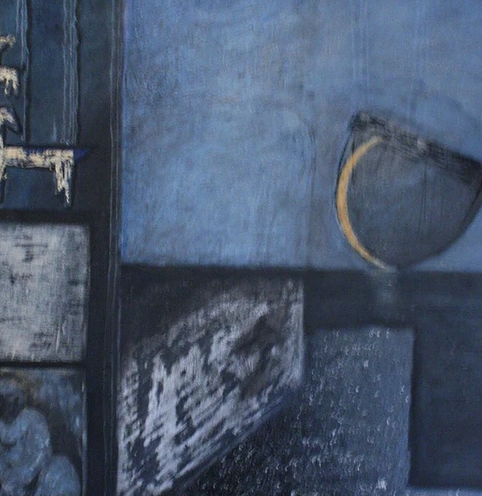 Do you create more when you are happy or unhappy?

Doesn’t matter. When I am unhappy I paint and that makes me happy.

What kind of people buy your artwork?

Usually people who are into abstract art. If I have to give a specific example, one of my paintings was bought by the local councillor.

Have you bought any original artworks?

I love buying artworks. Me and Johnathan bought one of Neil Moore‘s original charcoal drawings. Buying an original is such a good investment. Especially if you are choosing a present – it’s unique and it will remain as a memory of the gesture.

What differentiates your artworks?

My background has influenced my use of colour and texture. India is so bright and colourful. I love the textures, they are everywhere: the peeling off paint from the building. I also like the sensation of craping a layer off. It’s like a layer of wax that has fallen and set on your skin – it’s a nice feeling peeling it off.

How would you describe your creative process?

It doesn’t matter what I paint but how I paint it. It’s the process I enjoy. My artwork is like a journey – it starts somewhere and I never know where it’s going to take me.

Thank you so much, Suminder!

More of her works can be viewed on her website – Suminder – and some of them are displayed at Chrome Yellow Arts.

I am Silvena Toncheva, an Artist based in Warwickshire, United Kingdom. I create Naive Art paintings and Art Photography. I identify myself as a Professional Soul-Catcher as I aim to reveal the unique psychological makeup of the characters I portray. Feel free to explore my artworks at my official websites: www.silvena.co.uk and www.silvenaphotography.co.uk.
Loading Comments...
%d bloggers like this: